Unless you’re a traditional hand drummer, you’re going to need a good set of drumsticks. So far, we’ve reviewed everything from advanced drum microphones to electronic drum sets. However, no serious drummer is complete without his drumsticks.

If you’ve got a pair of trusty drumsticks in your bag, you can play any drum set almost anywhere in the world. You can even turn your local hardware store into a makeshift drum set (though we don’t recommend this).

While they aren’t quite as tiny and fragile as guitar picks, drumsticks are going to break and get lost. It’s an inevitable part of life, and a cost you need to factor in. However, the difference between a good set of sticks and the dollar store sticks is quality and attention to detail.

You need a set of sticks that will last hundreds of hours before breaking, and most importantly, feels good in your hand. A quality set of drumsticks will also be very well balanced and have a good weight.

We think that the Vic Firth American Classic drumsticks fit the bill, and today, we’re going to tell you why. 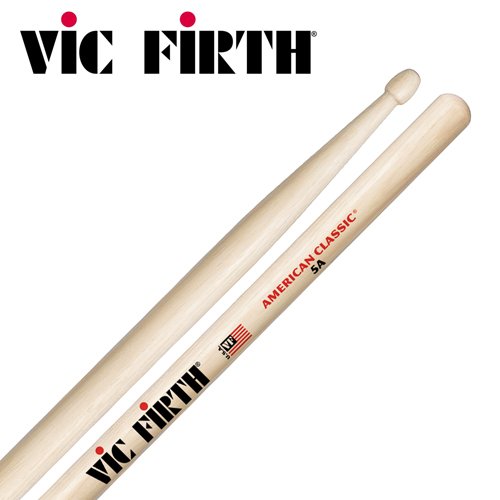 Now to the outsider or beginning drummer, one set of drumsticks may not seem all that different from the next. They’re long, wooden sticks with tiny balls on the end to hit the drum with and make some noise.

If you’ve been playing for some time though, you know that there is a considerable difference. Once you’ve discovered your particular drumstick, you’ll want to stick with it for life.

You’ll know the second that somebody hands you a stick that’s too light, unbalanced or has the wrong feel. You won’t be able to play as well, and you’ll constantly be aggravated at how poorly the stick is able to keep up with the natural rhythm of your hands.

So, that being said, let’s take a look at some of the finer details that make this drumstick stand out from the competition.

Hickory is one of the strongest woods around and makes for a great drumstick. Cheaper drumsticks often use oak, pine, or plastic. If you want a great sound, and a product that can last for years at a time, then hickory is the wood that you want.

Hickory also has a great feel in your hands. These Vic Firth American Classics feel like they were made just for you. They don’t get slick and try to fall out of your hand, and the wood carries the vibration to your hands just enough to give you the response you need without over-rattling your hands and fingers.

Vic Firth decided to back-cut their tips. This means that the ball on the end has a sharper edge, and is less prone to cracking and splitting. The accentuated edge also means that you’re going to get a clearer, more crisp sound when you’re playing the cymbals.

As if that wasn’t enough, the tips are also coated with a thin layer of nylon which prevents it from slipping off the side of the cymbal and allows you to keep up with a quick rhythm.

One of the biggest problems you’ll encounter when looking for drumsticks is that they are unbalanced. One stick will be slightly lighter or heavier than the other. As you can imagine (or have experienced yourself) this can be incredibly aggravating, especially if you’re exchanging the sticks between your hand.

All of the Vic Firth American Classic Hickory drumsticks that we’ve tested out have been perfectly balanced. That is very rare to find in your average product. To make sure that our minds weren’t playing tricks on us, we even tried weighing them on a scale for comparison. They were the exact same weight and very well balanced.

Once you’ve found a good drumstick, you’ll want to stick with it. However, over time you may find yourself wanting to try out different sizes.

Depending on what you’re playing or your increasing hand strength, you may want to try out a drumstick that’s heavier, lighter, longer, or thicker. Vic Firth has you covered, and they offer nine different sizes: 2b, 3A, 5A, Extreme 5A, 7a, 8D, 55A, and 85A. 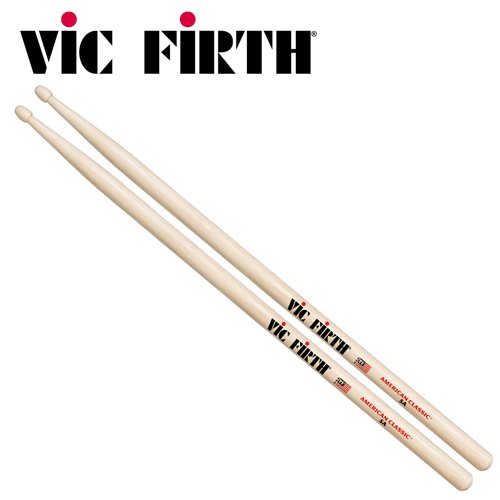 Customer reviews for these sticks are generally great. Vic Firth has done a great job at perfecting their product, and this is evident based on the majority of Amazon reviews. Almost every customer review mentions how great of a deal that they are. For just over $10, you can get a pair of top-tier sticks that can compete with those of rock legends.

Another common praise is for the balance that they have (which we just mentioned ourselves). Quite a few experienced drummers write in raving about how perfectly balanced the sticks were and at how impressed they were that both of the drumsticks weighed the exact same.

However, there are some people who stated that their sticks broke within the first week of use.

This anomaly is most likely due to certain factory defects or pre-existing problems with the piece of wood used. We never experienced this problem personally, but if you do get one of these rare duds, you can easily return them and get them replaced.

Overall, the average customer consensus was that the Vic Firth American Classics just feel good. There’s something to be said for a pair of drumsticks that feels like they belong right in your hands and give you a great drumming experience.

While you can most likely find these in your local music store, they are certainly going to be marked up. You may pay up to $20 for a pair of these, which we think is a ridiculous amount to pay for any drumstick.

We personally recommend purchasing your pair of Vic Firth American Classics on Amazon. Depending on what size you choose, you’ll pay right around $10 (give or take 50 cents).

Whether it’s your first time behind the set or you’re a seasoned drummer, you’re going to need a good pair of drumsticks. The Vic Firth American Classics are those. Unless you lose them, you’ll be able to carry around these sticks for years.

These quality hickory sticks are perfectly balanced and are guaranteed to feel natural in your hands. For right around $10, you’re not going to find a better pair.

Looking For Something To Make Your Music Sound Even Better?

0 shares
Special offer for our visitors

Looking For Something To Make Your Music Sound Even Better?

We will never send you spam. By signing up for this you agree with our privacy policy and to receive regular updates via email in regards to industry news and promotions